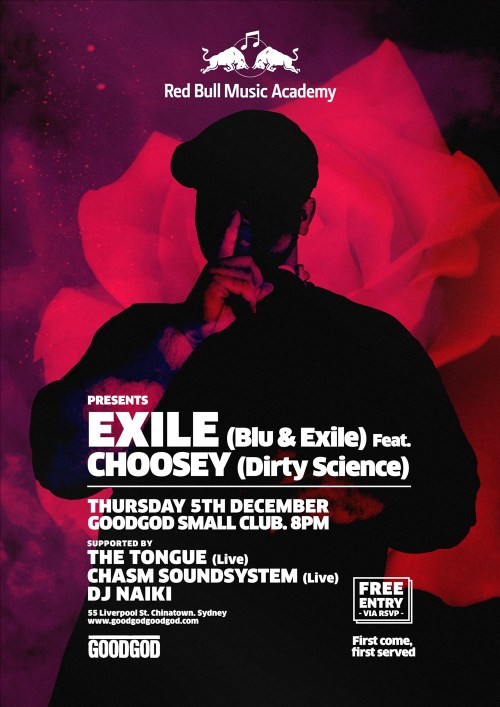 LA via the universe super producer Exile touches down in Sydney on thursday the 5th of December. He has brought along  partner in crime and collaborator Choosey from the Dirty Science camp for their huge live show, which is yep you heard it FREEE. They come through as part of the Monthly Red Bull Music Academy nights  held at Sydney’s iconic Goodgod Danceteria. The bill also includes Aus Hip hop Royalty in the form of Chasm running a special Soundsystem set and Sydney’s own The Tongue, with Stolen Records  favourite dj of all time Naiki filling the gaps.

Watch Exile and Choosey get busy below.

Hey remember this guy? He was on the show about a month ago and apparently he brought a camera crew.

This track is everything right about hip hop. Chilled beat, thoughtful lyrics and an MC with presence. Check the video and make sure you support homegrown talent and live music by seeing this dude when he comes to a venue near you. Remaining tour dates below. Oh and hey, if you close one eye, squint with the other and take a step back, you can see me at the 2:47 mark. Start the timer on my 15 minutes.

This week in Growing pains we get inside the head of Sydney badman Preacha. Preacha is also a good homie and i feel very lucky that he broke down some of the jams that helped to sculpt his varied musical leanings. For anyone that isn’t clued in to Preacha, he is one of Sydney’s upfront tastemakers, responsible for holding down  presenter duties on FBi Radio’s “Low Motion” with partner in crime Max Gosford. Preacha has also  played and regulated a bunch of the most significant bass parties across Sydney, as well as supporting all of your favourite internationals. For now let’s delve into some of the tunes that got him hooked.

This is one of my earliest musical memories that doesn’t involve Iron Maiden or Bon Jovi. My mum used to tape all the Godzilla movies for me when they aired on SBS and at the end of one of the movies (I think it was Godzilla Vs. Biollante) there was a whole bunch of weird music videos. This was one of them. I remember bugging out like “Who would make a song about a calculator?” but I couldn’t get the words out of my head. Plus I had one of those Speak & Spell joints that made the same kinda sounds. Still listen to this album all the time.

I first discovered this gem on the NBA Jam Session VHS tape around 93. This was the illest out of all the NBA tapes that were out back then because not only did you get all the highlights from the gods of that era but they were cut up with videos by Bell Biv DeVoe & Wreckx-N-Effect! That funky-ass baseline and Rakim’s delivery made this track stand out for me though. My brother Blake & I used to setup the Michael Jordan Pro in the lounge room, pop this tape in and get our Spud Webb on.

Now it’s like 1999, me and Blake are up late Friday night watching RAGE as per usual. This video comes on with 2 dudes riding in a drop top trying to run game on some females. Plus they’re cursing up a storm so I’m thinking this is gonna be some of the hardest gangsta rap shit I’ve ever heard. Then some creepy looking dude jumps out of a limo busting out some MJ type moves and the girls faces change to his! And the beats are like nothing I’ve heard before. My brother changed the channel and we just looked at each other like “What the fuck was that?!?” We flipped it back and now the girls have turned into grotesque monsters and the music is just blowing my mind. I couldn’t get the images and sounds out of my head for the rest of the weekend and I haven’t been the same since.

I think it was the October 1999 issue of The Source magazine the came with a little extra booklet of the top 25 Hip Hop Quotables up to that point. Included was Pharoahe’s verse from the classic Organized Konfusion track ‘Stray Bullet’ and even though I had never heard the song I thought it was the illest rhyme ever. So when I saw he had a solo album coming out I copped it as soon as it dropped. As soon as I popped the CD in the deck I knew I had made the right purchase. Up until then I was still jamming shit like 2Pac & DMX real hard but the ‘Internal Affairs’ album opened me up to the whole underground independent hip hop movement that was going on at the time. From then on I probably spent more time at Next Level Records than I did at school, spending all my lunch money on records. The whole album is dope but he flipped the Godzilla theme on this joint which kinda takes us back to where this little piece started. It’s all cyclical.

>>> This is also a brand new mix done be Preacha for the upcoming Mega festival OutsideIn. The mix covers a host of the artists playing on the day. Preacha will be holding down peaktime duties on the day. I would advise anyone who hasn’t got tickets yet to get their shite together before there sold out and you’ll be crying with regret. 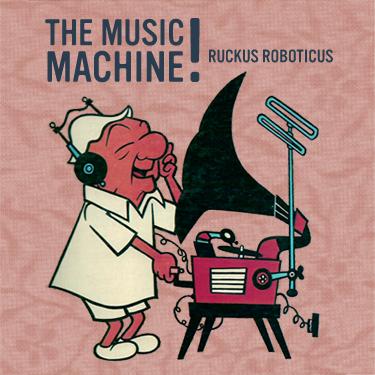 Ok so this Mixtape Monday is a history lesson, but it’s a fun histroy lesson that’s not actually that old. Today we’re  revisiting one of the most hyped mixes of 2007, Ruckus Robotics The Music Machine Mix, which was awarded Solid Steels best mix of the Year in 07, which is pretty much the mixtape game equivalent  to winning a Oscar. The mix itself goes everywhere from the Micky Mouse club to Bow Wow and the Avalanches to LCD soudsystem, all laced together with subtle cuts and playful samples to keep things fun and interesting. The mix is ripped from the Beat Oracle radio show on WCRS, so you will here some chit chat and history from Ruckus himself. Big Ups Beat Oracle for making this downloadable and available to the rest of the world. This mix won’t be for everyone, but for those who can appreciate a dj with serious skills and sense of humor, then this is for you. Ruckus Roboticus went on to release an insanely good album “Playing With Scratches” and continues to blow minds with  mixtapes, originals, remixes and edits.

Check Ruckus Robotics Getting freaky on the cut and paste tip below.

Download: Pookey Blow – Get Up (And Go to School)

Posted on August 1, 2012 by Shantan Wantan Ichiban | Leave a comment

WATCH THIS! Busdriver did this freestyle on the show late last year. Possibly the best freestyle we have had on the show since Aceyalone paid us a visit. There is something about those West Coast underground rappers and insane freestyle flows.

The Beat Junkies – For the Record from LRG on Vimeo.

This past weekend, the World Famous Beat Junkies celebrated their 20 year anniversary as a DJ crew. Performing to a sold out show at the Echoplex in Los Angeles, Beat Junkie enthusiasts new and old, from near and far, all came together to watch in awe as the crew provided a rare group performance. Check out the video above to see their history, or fast forward to the 7 minute mark to get a taste of their supreme talent as DJ’s.  It’s worth knowing that the Junkies are  essentially the most talented collective of DJ’s around.  Most of them tour the world regularly, they’ve won DJ battles as well as rocked parties, and they still maintain a humble and welcoming disposition.

They’re not just great DJ’s either, J Rocc just put out a solid instrumental album last year and Rhett consistently gives out free gems. Listen to some choice cuts below.

One element missing in the video above is Mr. Choc‘s towel. Real (sweaty) heads know what time it is.

So I do some work for Heaps Decent. Can’t really call it work though. It is too much fun to fall into that category. Basically it is a project putting on music workshops with young people in schools, juvenile detention centres, isolated rural communities and other places with some really talented local and international producers.

Each week at Redfern Community Centre, Heaps Decent runs a drop in program called Homebase. Tasha Lee Marshall, Fowl Murk and Medz are some of the youngsters that attend these sessions. Above you can see them perform their song Kick It produced by Heaps Decent facilitator Joyride, and below is a track by 14 year old Lil Ryonez and Monica Winter.

I have known Jeremi Jackson aka Twich for longer than most people in my lifetime. Over the years we have hung out and bumped into each other through mutal friends  and one thing has always remained constant, Twich constantly pushing his production, bubbling away in the depths of his studio like a mad professor, his sound getting more and more polished with each new track i hear. I rarely give advice but get to know about this dude, he has already worked with some of the finest from the states and Australian audiences have been sleeping    for too long.  Download a few jems off Twich’s Synethesia Mixtape and check the two clips below for some homegrown heat produced by the man himself.

Posted on February 22, 2012 by Shantan Wantan Ichiban | Leave a comment

Posted on January 2, 2012 by Shantan Wantan Ichiban | Leave a comment

Jean Grae has been one of the artists that has been the most fun to talk to. Without fail, really entertaining and hence the reason we are letting her take over Stolen Records this Wednesday.

She just released this song to the interwebs. It is going to be on ‘Cake or Death’… I think. Is this album ever coming out?

Tagged cake or death, Download, interview, jean grae, mp3, U & Me & Everyone We Know, U&Me&EveryoneWeKnow